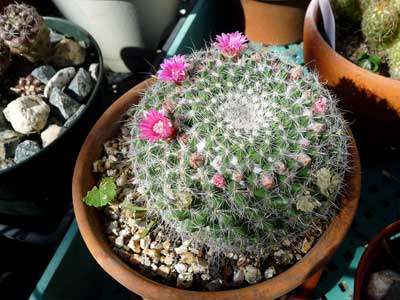 Origin and Habitat: Guanajuato, San Luis Potosí, and Queretaro, Mexico. It has a very limited range(extent of occurrence ca 1,000 km2) and is known from only two locations.
Altitude range: It occurs at elevations of 750 to 2,200 metres above sea level. It is very likely for the species to be found in Hidalgo.
Habitat and Ecology: The species occurs along relatively steep slopes in submontane matorral and deciduous forests. This cactus is locally common where it occurs, and grows in groups/clusters which are generally rare. Mammillaria hahniana is listed as near threatened due to is very limited range and because it is affected by illegal collection and some subpopulations are impacted by deforestation.

Source: The Encyclopedia of Cacti

The identifications on these pages are tentative

I would appreciate any corrections